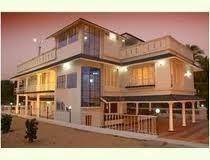 Make yourself at home in one of the 29 individually decorated guestrooms, featuring refrigerators and LCD televisions. Digital television is provided for your entertainment. Private bathrooms with showers feature bathrobes and hair dryers. Conveniences include safes and desks, and housekeeping is provided daily.Featured amenities include dry cleaning/laundry services, luggage storage, and laundry facilities. A roundtrip airport shuttle is provided for a surcharge (available on request).Make use of convenient amenities, which include wireless Internet access (surcharge) and concierge services.Take advantage of the hotel's 24-hour room service.

The following credit cards are accepted by Hotel Arina inn:

With a stay at Hotel Arina inn in New Delhi, you'll be minutes from Ambedkar Stadium and close to Red Fort. This hotel is within close proximity of National Gandhi Museum and Feroz Shah Kotla Fort.