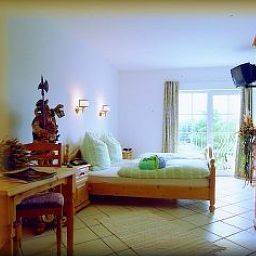 Hotel Landhaus Krombach is a cosy family hotel in Tyrolean country house style. Most of the rooms have a balcony. In the restaurant guests can enjoy regional, national and international cuisine. The new spa area include pool, sauna and steam bath. Our conference rooms are equipped with modern technology for successful meetings.

The following credit cards are accepted by Hotel Krombach Landhaus:

The hotel is located on the outskirts of Elkenroth, near the industrial town of Betzdorf. In the immediate vicinity, guests can visit the historic centre of Hachenburg. A golf course, hiking paths and the numerous sights of the region are easily accessible as well.

88% of the HRS guests recommend this hotel
Friendliness of the staff
How willing were staff to help?
Atmosphere at the hotel
Room configuration
Cleanliness
Sanitary equipment
Size of room
The quality of breakfast
Restaurant quality
Value for money
Sleep comfort