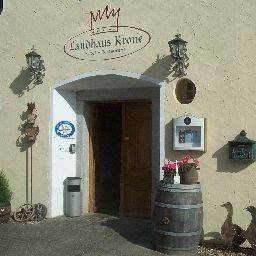 The Landhaus Krone is a country hotel in Steinach and provides cosy rooms featuring free Wi-Fi. In the restaurant with beer garden, guests may feast on Bavarian and international specialities. Moreover, free parking facilities are available.

The following credit cards are accepted by Hotel Krone Landhaus:

Thanks to its convenient location in Steinach, the hotel Landhaus Krone is an ideal starting point for sports activities such as hiking and biking in the Bavarian Forest. Attractions such as the open-air museum in Tittling, the amusement park Bayernpark in Reisbach as well as the city of Passau are reachable within 1 hour by car from the hotel Landhaus Krone.

91% of the HRS guests recommend this hotel
Friendliness of the staff
How willing were staff to help?
Atmosphere at the hotel
Room configuration
Cleanliness
Sanitary equipment
Size of room
The quality of breakfast
Restaurant quality
Value for money
Sleep comfort