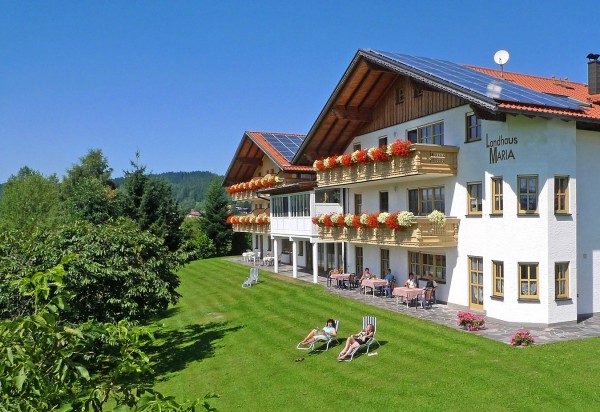 Choose to stay in this family-run guesthouse, which boasts a long tradition and has a uniquely pleasant flair about it. The light-flooded and spacious rooms are comfortably furnished, feature a balcony or terrace, and offer a cosy atmosphere. The spa area comes with a sauna, steam bath, and plunge pool. Enjoy the delightful panoramic view from the large garden with sunbathing lawn, fountain, pond, and terrace.

Reception manned at weekends
Not occupied

The following credit cards are accepted by Hotel Landhaus Maria:

The Landhaus Maria is set amidst some idyllic nature in the climatic spa resort of Regen in the Bavarian Forest. Enjoy the view of the hills and mountains. Located right at the Schwarzer Regen river, the region is a popular destination for hikers, cyclists, and canoeists who want to enjoy and explore the countryside. Popular sights in the area include the landmark mountain Geißkopf and the Glass Forest (Der Gläserne Wald).