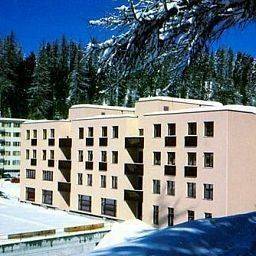 The attentive staff of the Stille Sporthotel warmly welcomes you. All rooms and studios are comfortably furnished, lovingly decorated and feature modern amenities. Enjoy a rich and varied breakfast buffet in the rustic restaurant, before you head out to explore the nature. In the evening the experienced chefs prepare a good dinner for you.

The following credit cards are accepted by Stille Sporthotel:

Situated close to Lake St. Moritz, this family-run hotel is the perfect place for nature lovers. The area invites to extended hikes and is perfect for cross-country skiing. Within a few walking minutes, you can arrive at the city centre and the train station is located at a distance of 2.5 kilometres.

75% of the HRS guests recommend this hotel
Friendliness of the staff
How willing were staff to help?
Atmosphere at the hotel
Room configuration
Cleanliness
Sanitary equipment
Size of room
The quality of breakfast
Restaurant quality
Value for money
Sleep comfort